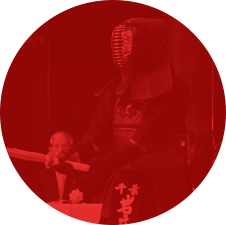 Dear Kendo Friends,
Recently, many of you may have seen posts on various websites suggesting that the “origin of kendo is in Korea and not Japan”. The All Japan Kendo Federation (AJKF) has declined to comment on these assertions. Kendo is a culture intrinsic to Japan which developed from the life and spirit of the samurai (or “bushi”). However, since the above-mentioned claims may lead to misunderstanding, we feel it is necessary to issue a formal statement to clarify our position.

Kendo originated from the experiences of the samurai who trained to use “nihonto” (Japanese swords) in combat. The samurai thereby acquired a distinctive appreciation of the “principles of the sword”. It is believed that through learning kendo one is able to gain an understanding of the “principles of the sword”. It is important to study the spirit of the samurai which is related to these principles, and can be learned through rigorous training in the use of the sword. This is why the objective of kendo is referred to as being a Way to develop the human character.

Thoughts on the Origins of Kendo

Swords were used in battle from the discovery of iron. The shape of iron swords and the ways in which they were handled have changed over time. Cultures of all regions influence each other through the movement and exchange of goods and people and continue to evolve over time to extend influence beyond national borders and race.

In this light, it is problematic to assert that one particular form of culture arose exclusively from one from one particular era and country. Kendo is no exception. Various methods of sword usage were developed around the world. However, what is called kendo now has evolved over many centuries in the cultural milieu of Japan.

A Brief History of Kendo

In the middle of the Heian period (794–1185), swords with distinctive features such as a curvature (sori) and raised ridges along the length of the blade (shinogi) were produced by Japanese smiths and became an integral part of the samurai’s weaponry. Swords came to symbolize the samurai’s spirit, and are often referred to as embodying the “mind” of the samurai. Not only seen as weapons, sword production flourished as an expression art representing strength and beauty.

From the Warring States period (1467–1603) through to the early stages of the Edo period (1603–1868), many schools of swordsmanship (kenjutsu) were established, and in the 18th century protective training armor resembling that used in kendo today was developed. Through this a new safe, full-contact methodology for kenjutsu training using bamboo swords (shinai) took root. Consequently, a competitive style of kenjutsu competition gained popularity and spread throughout the country around the end of the Edo period. Early in the 20th century, this type of training in swordsmanship, which was referred to as “gekiken” or “kenjutsu” was renamed “kendo” which literally means the “Way of the sword”. Kendo became a representative discipline of modern Japanese “budo” (martial arts/ways), of which the underpinning ideals of self-improvement are grounded in the spirit of the samurai.

The method of kendo that we study and enjoy now is a product of centuries of development in Japan, not other countries.

The Promotion of Kendo

With this in mind, there is an important point that needs to be understood by kendo practitioners around the world. Rigorous training is not just for the acquisition of technical skills with the sword. It is a process undertaken to understand correct deportment and social responsibility and to develop a steadfast mind, just as the training of swordsmanship was to the samurai. In other words, it is our hope at the AJKF that people in Japan and around the world appreciate kendo as form of budo, a martial Way studied for self-improvement and the betterment of society. The shinai represents the samurai’s sword. The keiko-gi (training top) and hakama (split skirt) were the formal attire of the samurai. In this way, the equipment used in kendo should not be considered simply as sportswear. Without upholding this spirit, kendo will become just another form of physical exercise. We hope that all practitioners will try to understand and appreciate the values and profundity of kendo.

The AJKF promotes authentic kendo. We are grateful for your support and continued cooperation in introducing kendo worldwide.

The All Japan Kendo Federation
Back