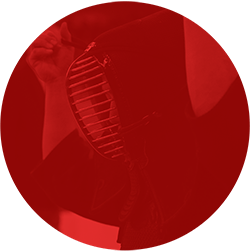 The History
of KENDO

The Birth of the Nihonto

There are several fundamental points that cannot be overlooked in the history of kendo. The first is the advent of the “nihonto”, or the Japanese sword.

The Japanese sword emerged in the middle of the Heian period (794-1185), and had a slightly curved blade (sori) with raised ridges along its length called “shinogi”. The prototypes of this style of sword were used by tribes of horsemen in northern Japan during the 9th century. Since then, this style of sword was adopted by samurai, and forging technology advanced rapidly during the early period of warrior hegemony from around the end of the Kamakura period (1185–1333). The shape of the blade was distinctive with its elevated sides (shinogi). In modern Japanese, the term “shinogi-wo-kezuru” means “grinding the shinogi together”—in other words, “a tight contest”. Such is the influence of the ideals of the sword in Japanese culture.

After the Onin War (1467–77), Japan experienced political and social chaos for over a century. It was during this epoch that many schools of swordsmanship (kenjutsu) arose. In 1543, firearms were introduced into the island of Tanegashima off the southern tip of Japan. The Japanese sword was forged using the tatarafuki casting method using high quality iron sand. However, it did not take long before this technology was applied to the production of firearms. As a result, the heavily-armored fighting style that prevailed hitherto changed dramatically to a lighter hand-to-hand style of combat. This in turn resulted in the further development and specialization of sword forging technology, as well as the establishment of more refined techniques and skills of swordsmanship which have been handed down to the present day through various schools such as the Shinkage-ryu and Itto-ryu.

Japan experienced a peaceful period with the onset of the Edo period (1603-1867). During this time, swordsmanship evolved from killing techniques to those that sought to nurture humanity through concepts such as “katsunin-ken” (the life-giving sword). Swordsmanship developed theories for victory, and also guided practitioners in leading a disciplined way of life. These ideas were compiled in books elaborating on the art of warfare and spirituality, such as Heiho Kadensho by Yagyu Munenori; Fudochi Shinmyoroku by the monk Takuan Soho for Tokugawa Iemitsu, the third Shogun of the Tokugawa Government; and Gorin-no-sho (The Book of Five Rings) by Miyamoto Musashi. Many other books on theories of swordsmanship were published during the middle and latter half of the Edo period and these are classics that influence kendo today.

What these works conveyed to the samurai was how overcome questions of life and death and how to apply swordsmanship in the course of daily life. Samurai studied these works to cultivate their minds in their devotion to refining their skills in bujutsu. The study of swordsmanship focused the samurai’s mind on differentiating between good and evil, and accepting their calling to make the ultimate sacrifice in times of emergency to fulfill their duty to their clan and lord. In peace they worked as civil servants, and in times of turmoil they were prepared to fight for justice. This is the summation of what is called the “bushido spirit” and even after the collapse of the feudal system, this spirit is still an important part of the make-up of the Japanese people.

The kenjutsu of the peaceful Tokugawa period was characterized by the development of graceful techniques deriving from actual combat. There were many masters of the sword who were instrumental in the evolution of what was to become the kendo that we study today. For example, Naganuma Shirozaemon Kunisato of the Jikishin Kage-ryu school developed kendo-gu (protective armor) and established a training method using the shinai (bamboo-sword) in the early 1700s. Nakanishi Chuzo Kotake of the Itto-ryu started a new training method using a men (head protector) and kendo-gu made of bamboo in the mid-1700s which quickly became prevalent. Inter-school competitions became popular in the latter 1700s. Swordsmen traveled throughout the country in search of stronger opponents to improve their skills.

In the beginning of the 19th century, new types of equipment were produced such as the yotsuwari shinai (bamboo swords made with four slats). This new shinai was more malleable and durable than the previous fukuro shinai (literally, bag-covered bamboo sword). Also, a do (torso protector) reinforced by leather and coated with lacquer was introduced. During this time, the “Three Great Dojo of Edo” gained immense popularity in the newly forming style of full-contact fencing with bamboo swords and protective armor: The Genbukan led by Chiba Shusaku; Renpeikan led by Saito Yakuro; and Shigakkan led by Momoi Shunzo. Chiba systematized the waza (techniques) of shinai training in the “Sixty-Eight Techniques of Kenjutsu” which were classified in accordance with striking points. Many of his technical innovations are still are still used in kendo today.

After the Meiji Restoration in 1868, the samurai class was dismantled. The wearing of swords was eventually prohibited and the popularity of kenjutsu declined dramatically.

Although shunned as outdated and useless in the theatre of modern warfare, various events during the Satsuma Rebellion of 1877—an unsuccessful resistance movement of samurai against the newly formed imperial government—led to a revival of traditional swordsmanship among government forces and the national police agency as means for effective physical training. In 1895, the Dai-Nippon Butokukai was established as a national umbrella organization to promote traditional martial arts in the modern era. This coincided with the publication of Nitobe Inazo’s world famous treatise in English, Bushido: The Soul of Japan, which addressed the culture and philosophy of the samurai.

In 1912, the “Dai-Nippon Teikoku Kendo Kata” (later renamed to Nippon Kendo Kata) was created to unify classical schools of swordsmanship and pass on the essence and techniques of the Japanese sword to later generations. It was also to supplement training with bamboo replicas, and make kendo training more realistic. In 1919, Nishikubo Hiromichi officially changed the designation of “bujutsu” and “kenjutsu” to “budo” and “kendo”. Replacing the suffix of “jutsu” (technique or art) with “do” (Way) was meant to accentuate the educational and spiritual aspects of kendo, rather than the technical or competitive side.

After Defeat in World War II

After the Second World War, kendo was prohibited for a while under the Occupation of the Allied Forces. In 1952, however, when the All Japan Kendo Federation was established, kendo was formally resurrected. Kendo presently plays an important role in school education and is also popular with people of all ages and walks of life. Several million kendo practitioners enjoy participating in regular sessions of keiko (kendo training).